Attractors are behavioral or structural states toward which, under some specific context, the system converges from a large set of initial states. In some sense these final states attract the neighboring ones. The set of all initial states from which the system’s behavior converges toward the attractor is called a basin of attraction. For example, one can metaphorically consider attractor states to be seas or oceans and their basins of attraction all the places from which rivers flow towards them. The river waters are (gravitationally) attracted towards their attractors (seas and oceans). In a sense, they are destined to attain the final attractor state. Rivers from different continents empty into the Atlantic ocean. All these regions form the basin of attraction of the Atlantic ocean. In similar vein, the ground (minimum) energy levels in atoms are the attractors and all the energy levels from which electrons tend to attain the ground state form the basin of attraction. Atoms may be defined as basins of attraction of their minimum energy levels (attractors). Long term stable shapes of leaves or trees toward which they converge during the growth may be considered as attractors. Remembering (memories) and recognition as well as biological movements are strongly dependent on attractor states in neural networks.
(see Figure 1.) 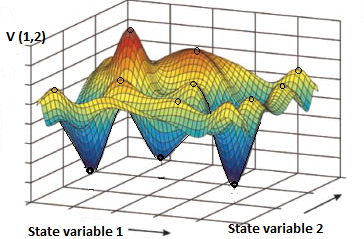 On the other hand, repellers are considered unstable states of the system’s behavior. If for some reason the system attains that state (for example by external perturbation) it tends to leave it spontaneously and converge to the attractor state. Hence, between the repeller and the attractor exists a flow or a vector field that acts as an attracting force.  For example, mountain ridges can be considered as repellers. As the mountain snow melts, the waters on each side of these ridges form different rivers which flow toward different seas. They create different basins of attraction. They are watersheds. The highest energy level in atoms may be considered as a repeller because the electron that have attained it can leave the atom and join another one or can converge toward the attractor (the ground energy state) of the first one.  At critical points initial states of matter become repellers (e.g. demagnetized state) and converge toward newly formed attractor (magnetized) state. At these, so called, phase transition/bifurcation/critical or tipping points, attractor states may destabilize and become repellers and other system states become attractors.

Video 1: After an initial perturbation (injecting energy by moving the legs) the exerciser initiates oscillatory dynamics. Due to friction (palm contact with the bar and air resistance) the initial energy injected is being slowly dissipated. Because of energy dissipation the oscillations are dampened and their amplitude θ continuously decreases. The oscillation dynamics of the exerciser is a long transient state toward the attractor of the rest state θ = 0. It is this state towards which the behavior of the oscillation converges. Once the rest state is reached, if the exerciser does not inject additional energy and perturb the rest state, he will remain in it infinitely long.